Whether you’re looking for extra horsepower or trying to cure a top-end oil pressure issue, Billet Fabrication knows what it takes to control your oil and get the most out of your combination.

For years, drag racers with wet-sump oiling systems have detected an alarming drop in oil pressure after hitting the brakes or opening the parachute. As G-forces reverse, it causes oil to rush to the front of the pan away from the pickup, thus causing a drop in pressure.

In some cases, racers have reported that the needle of the pressure gauge will sometimes drop all the way to zero! Obviously, low oil pressure when the engine is still spinning 6,000+ RPM’s is a recipe for disaster.

Billet Fabrication’s shop experimentation and extensive track testing (with oil pressure data loggers) revealed that common, trap-door baffles are doing a poor job of keeping oil in the sump under hard braking. While trap doors do slow down the movement of oil from the back of a pan to the front, a lot of oil still manages to get through the partially open doors.

Billet Fab understands your demand for performance and has perfected solutions to your problem. Now, drag racers concerned with sealing off the sump area during hard braking can choose from three optional, affordable innovations that are available for ALL of our pans: 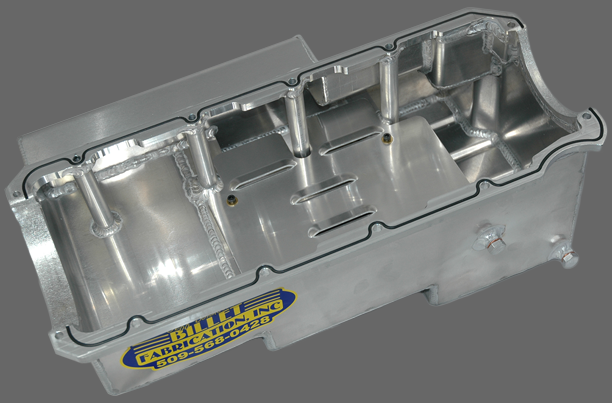 One of our popular solutions to low oil pressure caused from negative G-forces is our three-step pan, shown here and in the picture above. Our three-step pan helps eliminate oil from rushing to the front of the pan by creating walls for the oil to “jump” before reaching the front. Similar to a standard trap-door baffle but “solid” and much more effective.

This pan also includes our version of a removable windage try that not only helps eliminate parasitic loss when the crankshaft winds through oil, but the windage tray also helps keep the oil trapped in the sump.

This pan can be ordered in standard width, or as shown above with a 4″ kickout. It can also be fabricated as a two-piece pan.

Specifically designed for a Titan Speed oil pump, but available for most oil pump manufacturers, our anti-climb baffle seals and directs oil straight into the oil pump pick-up. Baffles are cnc-machined to match your oil pump and can be retrofitted to existing pans.

Our anti-climb baffles also helps keep oil volume around the pump so your oiling system is never substituted with air , the baffle also assists the windage tray by keeping oil splash away from the crank toward the back of the pan. While it may sound simple, our customers deserve every performance advantage they can get.

Rather than oil splashing around the pickup tube and above the port of entrance, our anti-climb baffle stabilizes oil flow and helps keep oil volume. Remember, while your oil pressure gauge may be reading 60 pounds of pressure, if air is being picked up rather than oil, your engine is being harmed.

Our Best Seller!! Two-piece pans are incredible for anyone concerned with main-bearing life and who perform regular bottom-end inspections. These pans are fast becoming essential for those using power adders. MORE

Whether you're looking for extra horsepower or trying to cure a top-end low oil pressure issue, controlling oil flow on all places of the race track is essential. Billet Fab provides multiple options for your racing operation. MORE

O-rings provide a positive seal and replace the need for gaskets and messy silicone, thus making bottom-end inspections quick and easy. At Billet Fabrication, captive O-rings are an option on all flat-sealing surfaces on our pans.
MORE

While dry-sump oiling systems have been popular in the professional categories for years, more sportsman racers switch to them everyday. Whether you need a 3, 4, or 5 stage pan, Billet Fab has what you need. MORE